You are here: Home » “Over the next 6 to 12 months we will have parity between the Dynamics...

Marko Perisic is the General Manager for Dynamics 365 Business Edition plus all Microsoft’s other ERP solutions for the SMB markets, including Dynamics NAV. This responsibility includes the product strategy and product development. Guus Krabbenborg from QBS met Marko for an exclusive interview for this report in Prague. 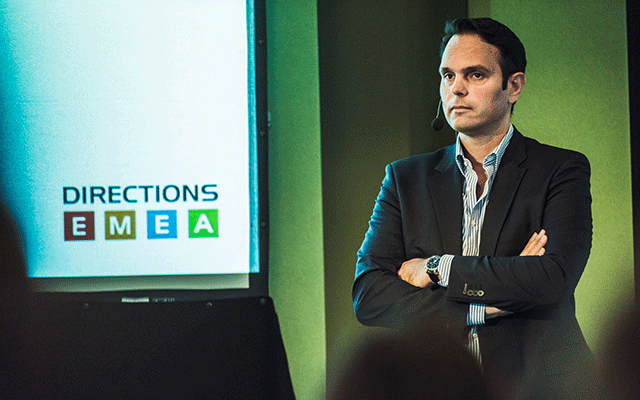 Main topic for this interview are of course the announcements around Microsoft Dynamics 365 and Dynamics NAV 2017.

QUESTION: As we speak we’re almost at the end of DIRECTIONS EMEA. Two weeks ago you were at the US edition of DIRECTIONS and earlier this week at the UG Summit in Tampa. What is your overall feeling about the launches of Dynamics 365 and Dynamics NAV 2017?

ANSWER: “I’ve experienced a lot of excitement around these launches and our plans for the near future. Both with partners, with analysts and the press. Of course we’ve also received lots of questions. And some partners are somewhat confused due to all the different announcements. So going forward we will focus even more on our communication in order to get everyone on the same page.”

QUESTION: Talking about communication – we’ve seen open discussions on LinkedIn lately. Is our observation right that Microsoft has changed the communication style?

ANSWER: “In what I now call the old days we used to have long release cycles and long disclosure periods before we officially announced a new product version. In today’s world we announce new versions so much faster that we had to adapt this. And for Dynamics 365, we ship an update every month, thereby the disclosure period is now only effectively 30 days and we try to avoid keeping news a secret. Instead, we focus on forward coming functionality and try to get everyone on the same page as soon as possible. The cost of delay is bigger than any potential risks of early disclosure.”

QUESTION: Many NAV partners seem to be surprised by the announcement that Dynamics 365 for Financials BE will be functional equal with Dynamics NAV in the next 6 to 12 months. Can you follow their reasoning?

ANSWER: “Yes, to some extent. In April 2016 where we’ve announced Project “Madeira”, and initially it was focused on companies from 10-99 employees. But soon after we realized that we can expand into a broader set of functionality to cover the entire SMB segment. Which is now Business Edition as part of Dynamics 365. Over the next 6 to 12 months we will have parity between the Dynamics 365 Business Edition and Dynamics NAV. The only choice for customers and partners will be, whether they want an on premise/hosted solution (Dynamics NAV) or a SaaS cloud solution (Dynamics 365).”

QUESTION: After the many discussions on LinkedIn and in other forums, we expected an extensive presentation on the new version of Extensions and its possibilities at the keynote. However, you spent less than 2 minutes in your presentation on this topic.

ANSWER: “The keynote was not the place for clarifications of detailed discussions. We covered the strategic direction and ambitions with Extensions. As a follow up to the keynote, there were many breakout sessions and Q&A to dig deeper into all questions about Extensions. Extensions are the way going forward to add functionality in both Dynamics 365 BE and Dynamics NAV. That could be both standard add-ons and customized functionality for a single customer. The good thing about Extensions is that they’re not touched in case of upgrades. In addition, the Apps that partners build for AppSource are also based on Extensions. So it makes sense for all partners to start to delve into the possibilities of Extensions. It is also a continued investment from Microsoft.”

QUESTION: Can you clarify on confusion about App’s, Extensions and Solutions?

ANSWER: “In short you could say an App is an Extension that has been published in AppSource. And a Solution is an App created by an ISV. I will also write a blog about it soon to take away the confusion.”

QUESTION: How should partners anticipate on new developments from Microsoft?

ANSWER: “Lots of information will be published on the public roadmap. On this public roadmap, partners can read about most of the developments to come. Because we will work with monthly releases, it makes less sense to be hiding information about relatively small changes. Microsoft wants to be more open about roadmap information and the Microsoft Dynamics team likes this change. Bigger changes might not be visible on the public roadmap, but we will ensure that if there are any, we disclose them in time and with information for partners to adapt easily. Extensions are one example of that. We did a lot of work on this prior to exposing them in NAV 2016.”

QUESTION: Are TAP programs obsolete with a public roadmap in place?

ANSWER: “TAP programs will still exist. The bigger changes will be shared in these programs and go-live customers are still an important part of it.”

ANSWER: “Yes, Microsoft sees that partners and customers will need more than 1 tenant per domain to work with. We are currently working on a solution for that.”

QUESTION: What are the top Go Do’s for partners?

ANSWER: “If you have success with an on-premise business today, keep it successful. But in the meantime start exploring Dynamics 365. Embrace Extensions. And start building IP with Extensions. This technology will be pushed by Microsoft as the technology to build solutions for the coming years.”

QUESTION: Can you elaborate about the integration between Dynamics NAV and Dynamics CRM?

ANSWER: “We already have a nice integration today and we are still improving that integration. We will use Microsoft Flow to build further integrations with Dynamics CRM. Scenarios with Dynamics 365 Sales without Dynamics 365 Financials and vice versa will still be supported, depending where the partner starts – by selling a CRM solution or by selling a full business solution. You can expect that the boundaries between these products blur more and more over time.”

ANSWER: “PowerApps will be able to support several platforms and even combinations of different data sources. Apps will also be interchangeable for a great part between NAV and Dynamics 365, but there may be some differences by the nature of Dynamics 365 being a SaaS offering. Attention has to be paid to required dependencies.”

QUESTION: What are your ideas about localization of Dynamics 365 for Financials? From a roll-out perspective, the current plans look pretty slow.

ANSWER: “The launch of Dynamics 365 will be the first time ever that Microsoft brings fully localized “fit and finished” business solutions to the market. Traditionally it was the partner channel who delivered this last mile. Well, that’s a pretty big change in our model! So it’s not just development capacity that we need, but much more highly specialized localization knowledge and capabilities. And of course these resources will differ per country. This is top of my mind and we are working on some very creative ways of accelerating this.

We see multiple options to speed up this whole process. One of them is to put the partner made localization in an Extension and use that Extension on the core Dynamics 365 platform. In that option we will try to limit the number of localizations per country to just one!”

QUESTION: Final question – what is your advice to Dynamics partners going forward?

ANSWER: “Many of our partners are still in their comfort zones today and as a result they are not really motivated to start the business transformation process. My advice to these partners is to start researching the possibilities of Dynamics 365 and all the new technologies anyway, because only then business owners can make thought-out decisions about a healthy future. Of course partners have to continue their current on premise based activities as well. But I don’t think that there are many partners who can afford NOT to embrace all these new technologies!”

You can find much more Need-to-Know-Information in our Directions EMEA 2016 Business Report. Order now